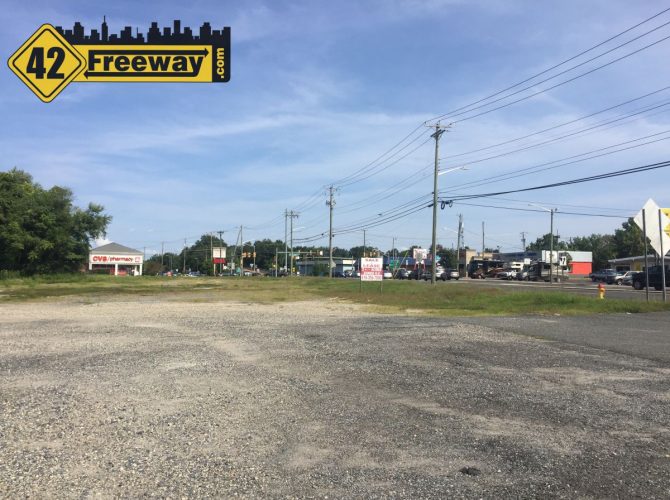 On June 12, 2017 the Berlin NJ Planning Board approved a Royal Farms Convenience and Gas Store to be located at the intersection of Cross Keys Road and White Horse Pike.  The location is currently an empty lot at the busy intersection, which shares the intersection with CVS and King of Pizza.  It’s surprising that this lot has remained undeveloped for so long, as the White Horse Pike leads to the center of the Berlin business district, and Cross Keys Road leads to very busy Rt 73 in one direction, and the rapidly growing Cross Keys commercial district to the south.

This is the second Royal Farms on Cross Keys Road that we’ve reported on this week.   Yes, we are overdoing it a bit with the Royal Farms stores, but for the most part… the ones I’ve focused on recently were stores that were not reported on elsewhere (Washington Twp at Fries Mill, Cross Keys at Johnson Road , Blackwood Clementon Gloucester Township.)   I am building up to having information on every South Jersey Royal Farms location, with a special menu and map.

While this Berlin store is a little further north than the traditional main growth areas of Cross Keys Road, it continues a growing string of new business announcements for the roadway including an Aldi supermarket, and 42 Freeway is working on two or three more new developments in the southern part of the roadway.

The Berlin Planning Board meeting minutes are available online (PDF), and they give a very good depiction of the conversations at the meeting as well as the residents speaking with concerns regarding the development.  Similar to other commercial developments, concerns of increased traffic were at the top of the list.

I think my readers who have been following my posts understand now what a Royal Farms is, but so that this article can stand on its own I paste in the content from one of my other Royal Farms stories:

If you are not familiar with Royal Farms, in its simplest terms they are a direct “Super Wawa” competitor, featuring stores of similar size, gas pumps out front, and prepared food items.  The two most significant twists are; they are famous for their fried chicken, and they offer indoor seating.

Mr. Gunter provided testimony as to what Royal Farms offers, hot and cold foods, world famous fried chicken and healthy on the go type options as wells as provide seating inside and outside. This proposed store is 5167 square feet, an open floor plan with seating 4 tables with 2 chairs each, and 7 to 10 stools where you can sit and eat and outdoor seating. The virtual tour was shown on the screens with Mr. Gunter providing a description of what we were viewing. There are 8 gas locations for this location. The hours of operations will be 24 hours.