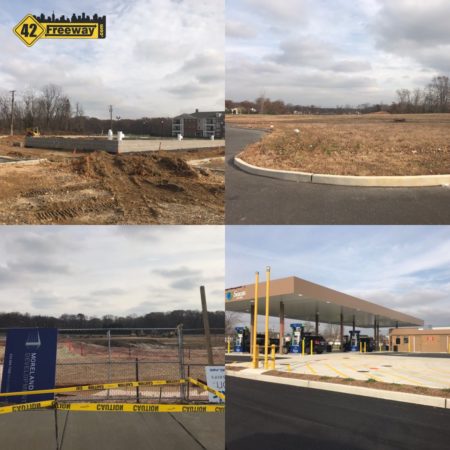 The Berlin-Cross Keys Rd commercial district continues to expand, with a project opening, two projects under development, and one slated to start soon.

Saturday afternoon I took a ride down Berlin-Cross Keys Road to check up on the status of several projects, before meeting up with friends at the Tilted Kilt for lunch.  Below is an update post on the key Berlin-Cross Keys Rd projects.

I created an interactive Google Map to show the locations of these projects.

Located on Berlin-Cross Keys Rd near the Black Horse Pike intersection, and behind Sam’s Club.  They are open now to serve gas!    We posted about this on August 10, 2018

Concrete and block foundation are in!  The Cinder Bar will sit on Berlin-Cross Keys Rd in front of the new Barclay Glen apartments.  The iHop restaurant is close by.  42Freeway broke this story back on Aug 30, 2017

Note:  This concrete foundation pour and cinderblocks was done during the last 3 weeks of November, as I took these pics on November 4th showing only the metal concrete pour frame.

The new Royal Farms will be located at the intersection of Johnson Rd and Berlin-Cross Keys Rd.  Yes, it will be directly across the street from the existing “classic” Wawa.  It seems this project required some significant site drainage work as there is what appears to be a large carved out retention basin, oddly at the main corner.  I also notice that sidwalk’s have been poured. 42Freeway broke this story the same week as the Cinder Bar story, on Aug 27, 2017

The Aldi Supermarket project further up the Berlin-Cross Keys Rd behind the Panera bread has yet to see any development activity, and people are wondering if it’s coming… but in the recent Fall 2018 Winslow Township Newsletter (PDF), Mayor Wright references that it is still coming!

The slow start is probably attributed to the large $3.4 billion growth spurt that they are undertaking across the US to include 400 new stores and expansion/upgrades to most of the existing stores.   With so much going on, things are going to take a little longer.  The Collingwood Circle location was recently remodeled/expanded and had its grand re-opening last week.

LIDL Berlin-Cross Keys:  Not Started.  The last information I see on this project is Fall 2017 when the project appeared before the Gloucester Township Planning Board for final approval.  (PDF)  I may have missed something… let me know if you know otherwise.   42Freeway first posted about this location back in 2016, after learning about it from a GloucesterTownshipNews.com post.

If developed, this would put FOUR Supermarkets in the same location… the existing Acme and Shoprites, the soon to be started Aldi, and LIDL.

Early 2018, LIDL was in the news regarding they wanted to reevaluate their plans for US expansion, based on their already opened stores in the Virginia area.  In fact, they already own a plot of land for a store in Mantua, and from what I understand. that has been put on hold temporarily.

That being said, I have not given up on these new LIDL Stores in our area.  A second Gloucester Township store for Blackwood-Clementon Road went through the planning board just this summer (after that article was published).

At this point my theory is they are getting their approvals in line to do a multi-site development effort.  I am not a construction engineer but it seems to me it would be more cost effective to build several in the same time frame… as you assemble the foundation development team for example, they can finish one property and roll over to another.

But at this point, anything can happen.