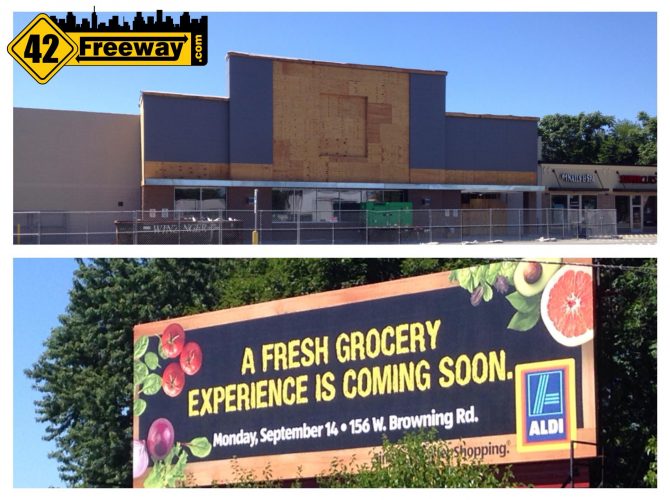 Bellmawr will soon be back in the Supermarket business again, with the opening of the new Aldi store set for less than one month away, on Monday September 14th, 2015!

The store is located on the site of the former Bottom Dollar Food store, which was new construction and only in use for a short time before the company closed all locations.  Even with a completely new building, Aldi has done extensive remodeling to the store inside and out, as they want a consistent customer and employee experience in all of their stores.  Old time Bellmawr residents will remember the location as the Heim’s Supermarket.

It seems that Aldi is excited to be in town also, as over on Rt 130 across from the Pennant they have put up a billboard announcing the new store and its opening date!   It seems to indicate that Aldi thinks they can draw from a wider area than just the core of Bellmawr, and they are looking to be tough competition for the Brooklawn Shoprite.

With less than a month to go, workers are still finishing the front façade of the Aldi building, but I’ve been driving by almost weekly and they are making quick work of the exterior.

Aldi is also opening in Woodbury at another converted Bottom Dollar Food store, and NJ.com says they open on September 3rd.

Jobs?  I know two things:
1) Aldi has a site dedicated to applying for jobs.  AldiStoreJobs.com

2) Posts in job sites indicate decent pay for jobs, with Full-time store associates starting out at $11.25 per hour.

The closed K-Mart being at the Toll House Plaza Center on Bridgeton Pike in Mantua, is proposed to become a 98,000 sq ft indoor self-storage facility.   The center owners/developer will appear before the Mantua Planning Board on July 21st at 7pm, asking for "Interpretation of permitted commercial establishments allowed in a shopping center" as well as other requests.

Construction fencing has appeared on Route 45 Woodbury Heights at the site of the former Bruster's Ice Cream. We reported in 2017 that a Starbucks was planned, and despite a decent delay we still believe Starbucks is coming! And seemingly, construction starting soon.

For almost two decades in the 60s and 70s, when listing the centers of the entertainment world; Cherry Hill's Latin Casino could be said in the same list as Hollywood and Vegas. Last week Netflix released their epic Scorcese film "The Irishman" which is about mob member Frank Sheeran but the story delves deep into the Hoffa mafia empire... and the Latin Casino is recreated in a key scene in the 3.5 hour long movie.
This Post Has 0 Comments