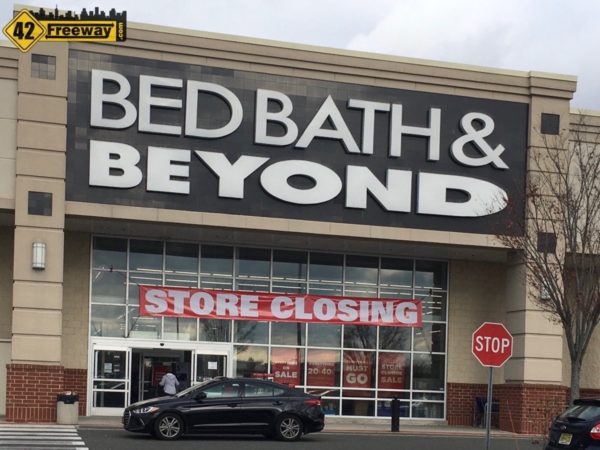 About 2 months ago Bed Bath & Beyond announced that they may close up to 40 stores (plus 20 other concepts), and recently we learned that the store at 141 Tuckahoe Rd in Sewell is closing.  The banner hanging across the entrance makes it clear “STORE CLOSING”.

Adding to the pain, this store is located next to an A.C. Moore location which is at risk of closing.   A.C. Moore previously announced they are closing all of their 145 stores but approximately 40 of them will become Michael’s stores.  Michaels has not stated yet which stores they are taking over.  The A.C. Moore store does not say closing, but Mrs 42Freeway tells me they had a banner saying 50% off the Entire store.

Also located in that center is a somewhat still new Edge Fitness location (which replaced Sports Authority), PETCO, and the long standing Home Depot is next door.

In our area there is also a BB&B store in Deptford across from the mall.  At this time we believe they are safe.  It is our understanding that the entire Deptford building of stores (Christmas Tree Shoppes etc) are owned by the same parent company, so it benefits their other stores at that location to keep all of them open.  Plus from what we see, the Deptford location does very well despite the strong competition.

1 thought on “Bed Bath & Beyond Sewell is Closing. Located Next to an A.C. Moore, Which is at Risk (Washington Township)”