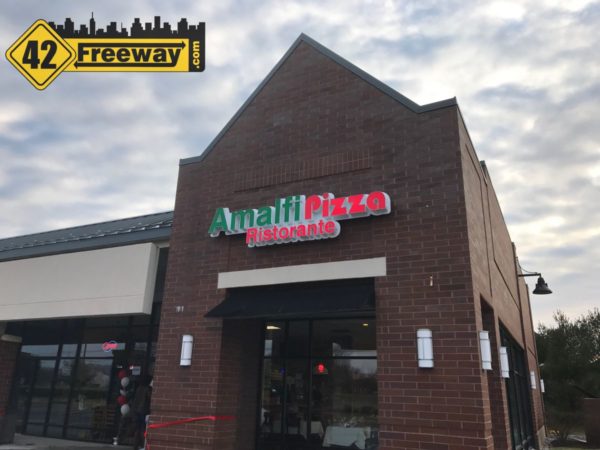 I feel like I owe the new Amalfi restaurant an apology.  I live close by and saw that a new eatery was taking over the location of the Marco’s Pizza.   I actually stopped in within days of opening.  I then had a recognized name in the Township message me about how awesome the place is.  I then stopped there for dinner… TWO WEEKS ago… and yet, for some reason I didn’t post about it.  Until today.

And the truth is, they really don’t need my help.  The place is doing very well.  Seriously doing well.  Although if I had gotten that post out earlier I would be taking credit for all of their great early success!

Yes the name has “pizza” in it.. but this is not your regular “slice and a coke” strip mall joint.  The packed house that my family walked into were there for the delicious Italian dinners.   Ok, I’m sure many were eating pizza, but it was the entrees that brought them to Amalfi.

So how do you describe “doing well”?  My wife, daughter and I were heading back home to Deptford on a Friday night after visiting family and it was around 9pm, maybe even later.  So we’re driving down Egg Harbor Road and Amalfi popped into mind.  We head in.. and this is not an exaggeration at all…   as late as it was… every single table but one was taken.  Yes, its not a huge dining area.  But after 9pm, a place that has only been opened a month has 40 people eating?   I quickly counted at least 10 people working just to keep up with things.

How could word get out so fast?  It wasn’t 42Freeway, that’s for sure!  ha.  Could they be doing things so right, to draw this kind of fast attention?

On the day we stopped in to the restaurant, it was only open for about 5 weeks!

So we felt lucky to grab a table as we walked in, and all three of us ordered entrees.  My wife ordered Eggplant Parmigiana, my daughter ordered penne pasta with one of their sauces from the daily specials, and I ordered the signature Chicken Amalfi with… yes! They offer gluten free pasta also!

But I will say we LOVED our dinner.  The portions were huge.  My wife’s parmigiana was two full meals for her.  My meal.. well, yeah it would be two meals for most but I didn’t want to disrespect the owners by not finishing it! ha!

And speaking of owners… with the night winding down and the crowd thinning, out of the kitchen popped Bruno.  It was easy to tell that Bruno was excited about his restaurant and their success.  He was working the tables, chatting with customers, and offering up great information on the restaurant.

He was like a kid at Christmas.  Was very nice to see.

Bruno tells us he previously had a place in Pennsauken.  He tells us about the ingredients.. everything is fresh.  Everything is made in the restaurant.  Customers appreciate good quality he said, and I guess his early success shows.

Weeks in they already had to start taking reservations, and walk-in customers were waiting for tables.  I can’t dispute that statement considering the later crowd I saw.  Bruno was both confident and amazed at the early success he and the crew have had.  He talked to us for about 10 minutes, and then moved over to the table next to us.

They must be doing something right at Amalfi.   I hope I didn’t overly dwell on their early success, you can still easily get a seat to try out this welcomed new eatery.

We wish Bruno and the team a lot of luck!  They are off to a great start.

There is a TON of competition in the Washington Township area, and along Egg Harbor Road specifically, including two other new eateries opening up in the same timeframe.  So I have a few more Italian food stories to post over the next few days, and maybe a special report on what I really think is the heart of Italian food in our area.