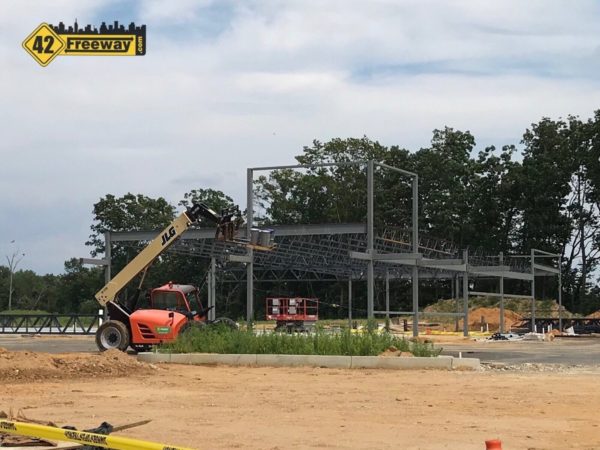 Two years ago we told you about the Cross Keys Royal Farms coming, and a new Aldi Supermarket… well they both have similar construction timelines as now the Aldi is showing significant signs of progress, with the steel frame structure starting to rise.  The location is at the intersection of Berlin-Cross Keys Rd and Williamstown-Erial/Chews Landing Rd.

Specifically, the new supermarket is being developed behind the Panera Bread, Wendy’s and Auto Parts Store.

While I have not seen the final design rendering of the new Winslow Aldi, you can already see in the steel framework corner the tell-tale entrance block that is also in the newer Turnersville store.

Also at the intersection (on opposite corners) is an existing Shop-Rite and Acme Supermarkets.  Adding to the fun… Another German based Supermarket, LIDL, has an approval to build next to the Acme Supermarket!   There has been no movement on the LIDL store for this location… and actually, while they continue to get approvals for stores in South Jersey, other than the opened Vineland store I don’t believe any others have started construction.  Recently LIDL announced construction of several new locations in the North East including Philadelphia, but again.. no more from South Jersey.