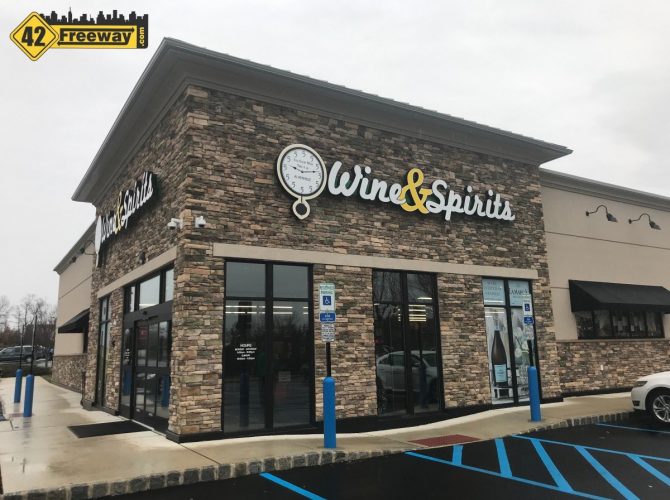 Just 6 weeks ago, 5 O’clock Wine and Spirits opened in Mullica Hill (Harrison Twp) NJ. I don’t always post about a new liquor store, but what is significant about this new establishment is it is the FIRST “Full alcohol offering” business in Mullica Hill!

42Freeway stopped in today to check out the store and pick up a few bottles of wine. They are open today (New Year’s Eve) until 10pm, but closed on New Year’s Day. The have a nice array of wines and beers.

And yes, I understand that the very successful Heritage Winery has been open in town for almost 20 years, but that license is issued at the state level… and even with the winery in place Mullica Hill was still considered a “dry” town, much the same way that Collingswood is a dry town even though they have a craft brewery.

Back in 2009, the previously “dry” town of Mullica Hill/Harrison approved the sale of several restaurant based liquor licenses as a means for new revenue and town growth. I am sure that the plans for the massive and long delayed Richwood Village commercial project was a key catalyst for the license sale approval, and in fact that development purchased FOUR of the five licenses at a cost of $2 million total. The fifth license was purchased by local (and loved) Naples Pizza at the Warehouse (Facebook), who are finishing up a restaurant remodel to include the bar.

With the restaurant licenses squared away, in 2015 they town approved two liquor store licenses and put one of them up for sale. Obviously, the 5 O’Clock Wine and Spirits Store has that license.

Unfortunately after MANY years of delays, little has happened with the massive Richwood Village property. They have made moves in regards to purchasing hundreds of acres of properties at the 322 exit to 55, and as mentioned they also purchased FOUR liquor license in preparation of the development… but up to this point no dirt has been turned over.

I have been researching this project and have some new news to share… will target a post for later this week. Meanwhile, the excitement of having four new restaurants, Costco and other stores in an area which really could benefit from it… has faded.

I always remind readers that commercial development can just take a ridiculously long time. Back in 2015 NJ.com wrote that the town expected to have a liquor store open that same year. The Mullica Hill Sun writes how the restaurant licenses were approved almost 10 years ago! (but first sold in 2013) And the Richwood Village project has been in official planning at many levels for over 10 years!