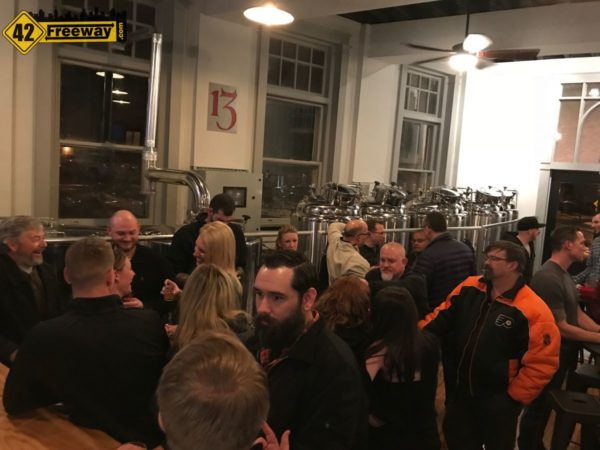 The brewery owners are not new to this, having previously owned Blue Anchor Brewing.   They ran into some legal trouble when Anchor brewing felt their name was too similar, so the partners regrouped their gameplan, and took their expertise to Williamstown.

The more intimate setting, has them going a different direction than many other breweries.  With a larger number of smaller brewing vats.  The triangular shaped room offers full immediate access to the brewing area, seating and two bars.

Despite its cozy size, they opened up with 8 beers on tap.  42Freeway sampled a 4 beer flight and we were very impressed!  I am not going to kid anyone, I am not a beer expert so this isn’t a review…  but this is definitely a place to visit.

The location is a block away from the remodeled Grand Theater, and the town is hoping this brewery continues the rebirth of this main street area.

The unique name?  Well when the owners chose Williamstown for their new location, they asked the community for name suggestions.  Several suggested ideas involving the legendary Jersey Devil.  According to legend, the Jersey Devil was the 13th child of the parents, so the brewery owners jumped on it.  One of the owners shared they are happy with the response they are getting from it… giving it an edginess.

This really bad quality YouTube video, was actually a Facebook live stream.  It seems the connection was not strong enough to give me an HD stream, and I was struggling with the mic.  Tune in anyway to hear my rambling commentary.